“Community is always at the centerpiece of our operation,” notes Virginia Beer Co. Co-Founder Robby Willey. “With roots from our days at William & Mary, it’s a big part of why we started brewing in Williamsburg in the first place. So when the pandemic hit, we really struggled not being able to host our neighbors at the brewery, especially for collaborative fundraisers that would normally help us give back.”

Like most businesses, The Virginia Beer Company had to temporarily close its facility to the public in mid-March, postponing marquee events like the brewery’s 4th anniversary. The brewery shifted to curbside-only and local delivery operations until Phase 1 protocols allowed them to reopen parts of their outdoor beer garden.

“Our primary focus at the beginning was to do everything we could to keep our entire team with us. We are fortunate to have been able to do so since Day 1,” reflects Virginia Beer Co. Taproom Manager & Business Developer Luci Legaspi. “Once we got the hang of curbside and delivery operations in March, we started to consider how we could keep up with the ‘Purpose’ part of our company mantra [Beer · People · Purpose].”

With limited operations, Virginia Beer Co. was challenged to contribute in traditional ways like hosting large benefits or donating money directly. Initially, the brewery teamed with local musicians to help support an online streaming service for artists to perform for tips; the brewery provided free advertising, beer, and gift cards for raffles to help promote Live From Retro Daddio. The idea to provide free beer was a way to share some cheer and ease up on pocketbooks for those with reduced income, and led to Virginia Beer Co. offering beer to non-profit groups such as the Williamsburg House of Mercy. 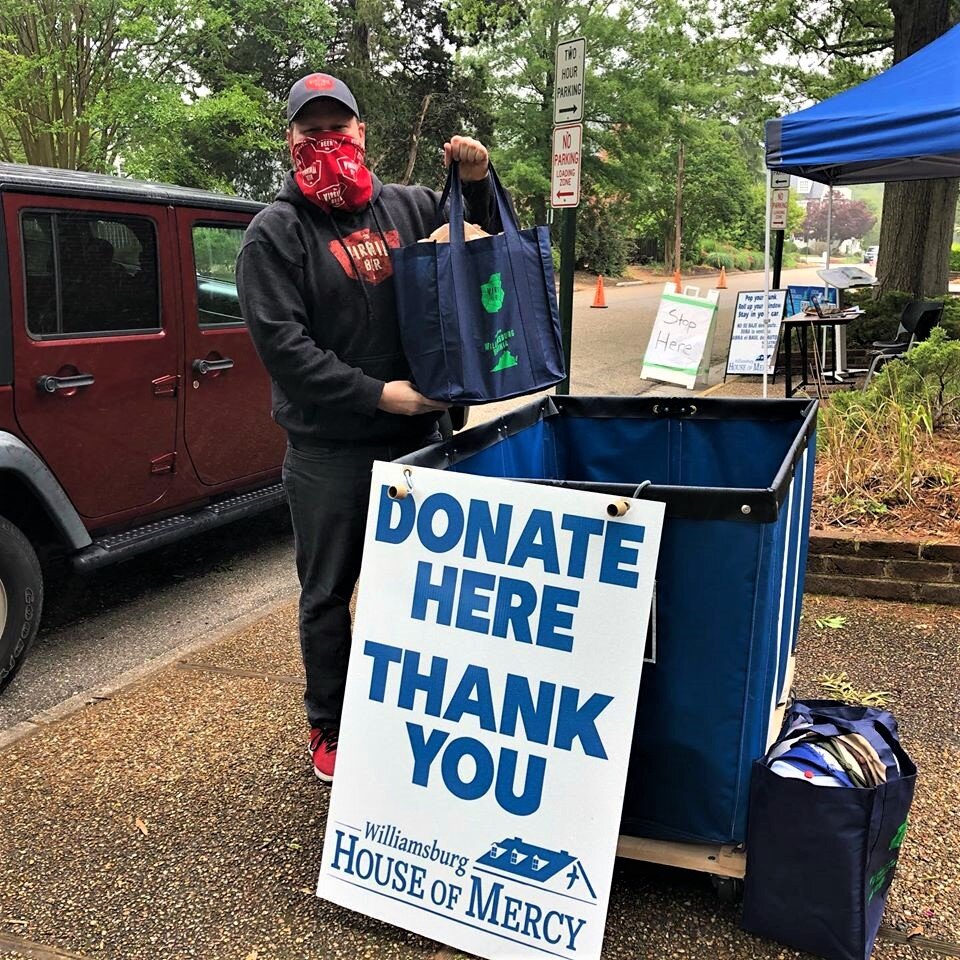 “We wondered if we could simply provide some beer to thank those who were working on behalf of so many in need. We offered a few six-packs to the Williamsburg House of Mercy and that led to us teaming up on a food & goods drive that is still ongoing,” notes Robby W. “While we were still not able to make a direct donation, helping WHOM thank their volunteers with beers & cheers — and then offering to trade discounts on cans to our customers in exchange for donating items that WHOM needed felt like a step in the right direction. That’s led to some hefty drop-offs on behalf of the community through the brewery to WHOM.”

When the pandemic hit, The Virginia Beer Company had been working with Love Is Love Tidewater to sponsor the Williamsburg area’s first ever Pride Fest in late April. When the festival was postponed due to the pandemic, the brewery decided to brew a beer celebrating inclusivity. 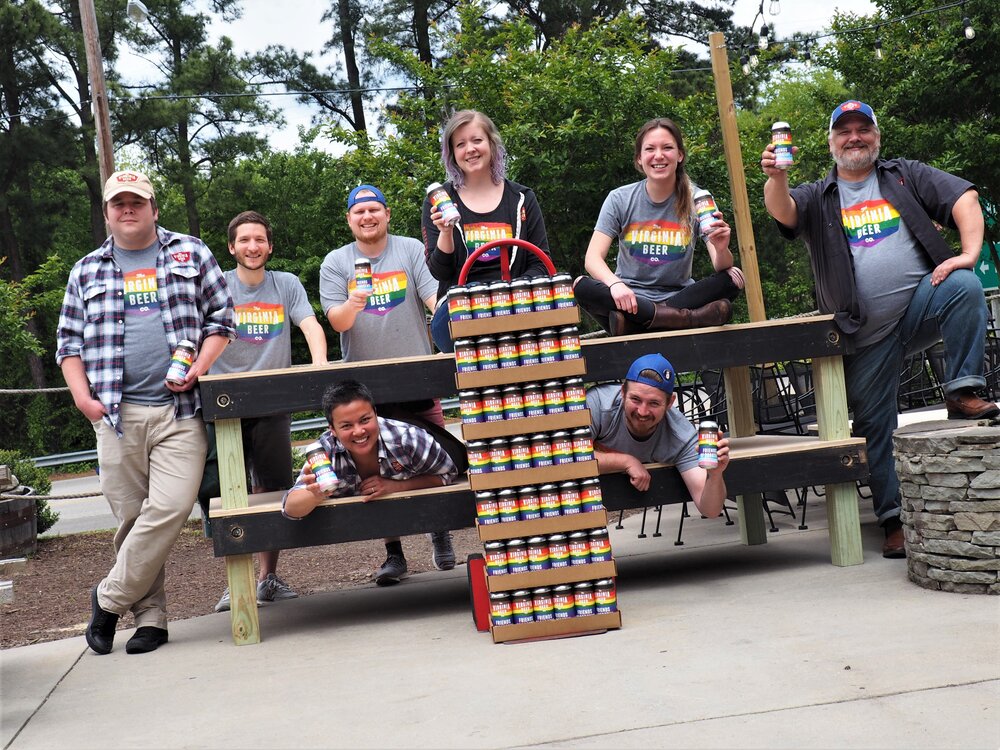 “Friends of Dorothy was originally a small batch release only available at the brewery,” comments Virginia Beer Co. Director of Sales Michael Rhodes. “Just because we couldn’t celebrate cheers for all in person didn’t mean we couldn’t do so from home with a beer brewed for all. And because we want to show that Pride isn’t just a festival or a month, we’ll be releasing our Pride IPA again in July and sending it out to our distributors to share the liquid love across the Commonwealth.”

The brewery also joined Other Half Brewing’s global All Together brewing project in late spring, which focused on supporting those out of work and most in need due to COVID-19. The beer sold out in 72 hours after release, and Virginia Beer Co. was able to make a $1500 donation to the Williamsburg Community Foundation to benefit WCF’s Emergency Response Fund because of sales of this beer.

In June, Virginia Beer Co. had been planning to release a beer to celebrate William & Mary’s One Tribe One Day annual fundraising milestone. “We released Now & Evermore Golden Ale as planned,” notes Chris S. “But after considering the important social conversation taking place at the time of the release, we decided to shift the focus to supporting the College’s funds that promote inclusivity and equality (such as The Lemon Fund and the W&M Center for Student Diversity). A portion of proceeds of every ounce sold will do just that.”

Up next, The Virginia Beer Company will be participating in the Black is Beautiful beer initiative launched by Weathered Souls Brewing Co. 100% of proceeds from this Imperial Stout release will be donated to a local non-profit, Media Mentors. Media Mentors works to provide a voice for the too often voiceless by providing communities in need with access to education and technology tools. Their goal is to help youths in underserved communities create and sustain positive, informed, grassroots narratives. 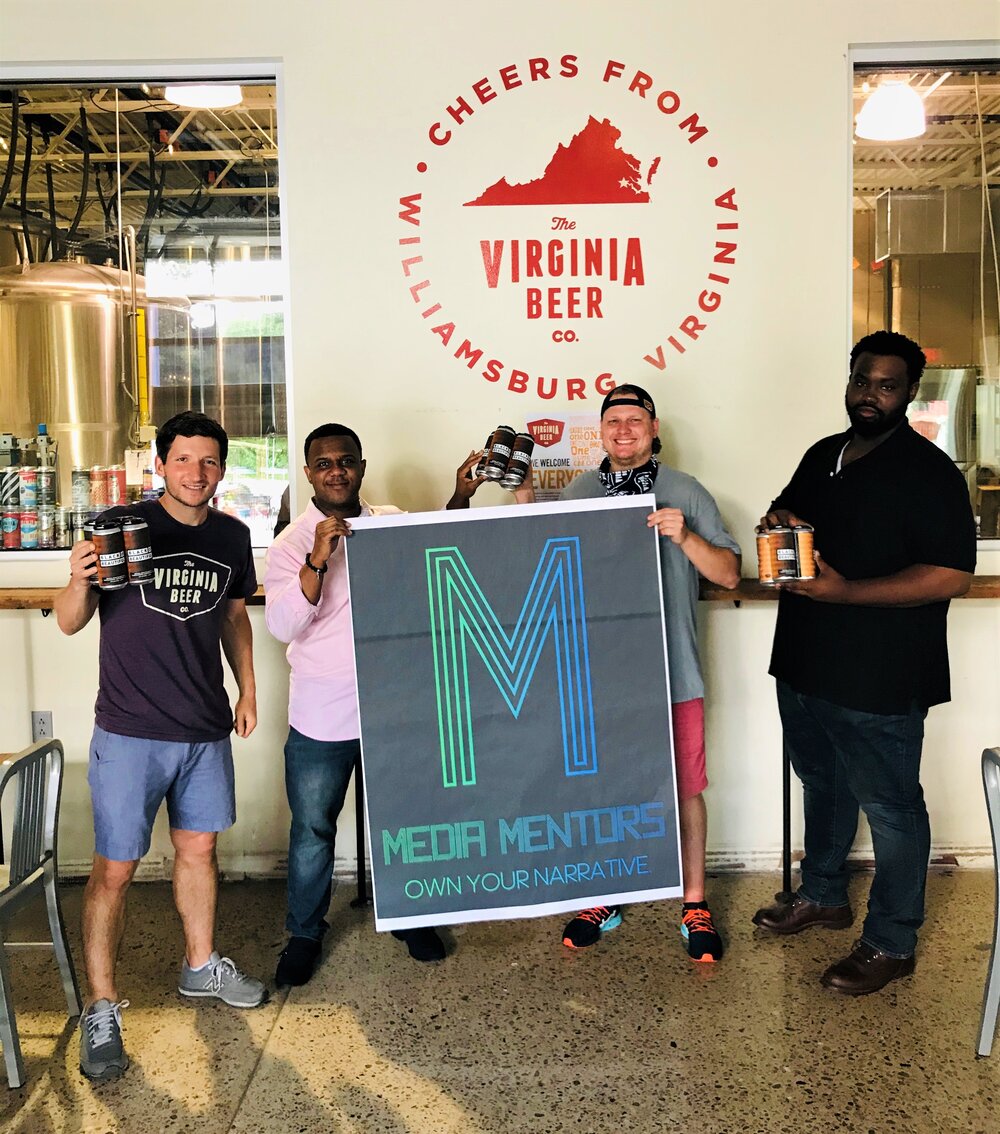 “As it has for everyone, the past few months have been a challenge,” reflects Robby W. “But we know it’s been a challenge for some more than others. So we feel blessed and proud that we’ve been able to do what we can to keep giving back while trying to keep things ‘beer positive’. Even if we can’t host everyone here, we hope that by creating can releases for a cause we can keep doing everything in our means to remind everyone to be excellent to each other from afar – even in times of trial. And hopefully that will help inspire others to do the same.”