WILLIAMSBURG, Va. – In honor of Breast Cancer Awareness Month, The Virginia Beer Company (VBC) on Friday will release Here For The Girls, a pink-hued Golden Ale with Hibiscus flowers, in support of the non-profit organization of the same name.

The mission of Here For The Girls, Inc. is to improve the lives of young women affected by breast cancer, specifically those diagnosed under the age of 51. The Williamsburg-based organization serves this specific demographic because many support groups have historically been set up to help older women (the median age for breast cancer is 63).

VBC’s philosophy is: ‘Beer · People · Purpose.’ Founded with the intention of being a force for good in the form of a brewery, VBC is passionate about advancing causes that personally resonate with their staff members, family, friends, and community.

For co-founder of VBC, Robby Willey, supporting Here For The Girls, Inc. is deeply personal.

“Of all the causes we support, this is one of the most meaningful for me, personally,” said Robby Willey. “We lost my mother to a battle with breast cancer in 2013, when she was just 65 years old. We’re proud to be teaming with H4TG to bring awareness and resources with this collaboration, and we hope many will ‘drink pink’ this October and join us in raising a round to those in our lives who have and still may be fighting this battle.”

In addition to a percentage of taproom sales from 10/1’s release, twenty percent of the proceeds from the sale of the beer will go to Here For The Girls, Inc. VBC will also be unveiling a limited edition run of Pink Ribbon logo shirts as part of the release celebration, and a portion of proceeds from shirt sales will also be donated to Here For The Girls, Inc. VBC is also a premier sponsor of the organization’s annual golf tournament in April, which is its biggest fundraiser. It is the one of the few times VBC provides an outright monetary donation as a sponsor, in addition to a charitable percentage of sales.

“Hopefully one day we’ll be raising a round to no more of these battles needing to be fought ever again,” notes Robby Willey.

The Virginia Beer Company is a brewery, taproom, and beer garden located in Williamsburg, VA’s Edge District. The brewery was founded by two graduates of nearby William & Mary, who shared a passion for philanthropy, community, and great beer. VBC is proud to have their beer available throughout the Commonwealth of Virginia, as well as in New York and in multiple countries overseas including Japan and the UK. Since opening in 2016, VBC continues to be guided by the principles shared by its core of founding team members: Beer · People · Purpose. 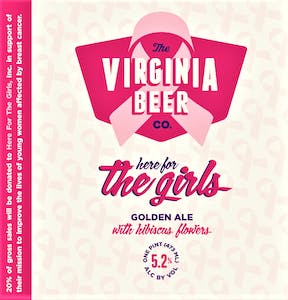 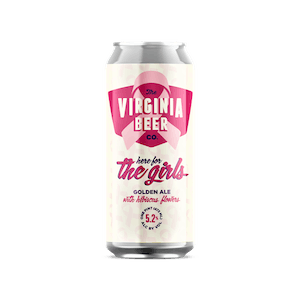