We are very pleased to announce that 401 Second Street, the future home of The Virginia Beer Company, is an active construction zone! In mid-August, we received final word from the Virginia Department of Transportation, the City of Williamsburg, and York County that we had been granted the necessary permits in order to move forward with our site work and buildout at the property. Late last month we met with our general contractor to review the final pricing plan for the buildout and sitework. We signed our final construction contract on August 24th and before the month was out, the survey crews were on site at 401! 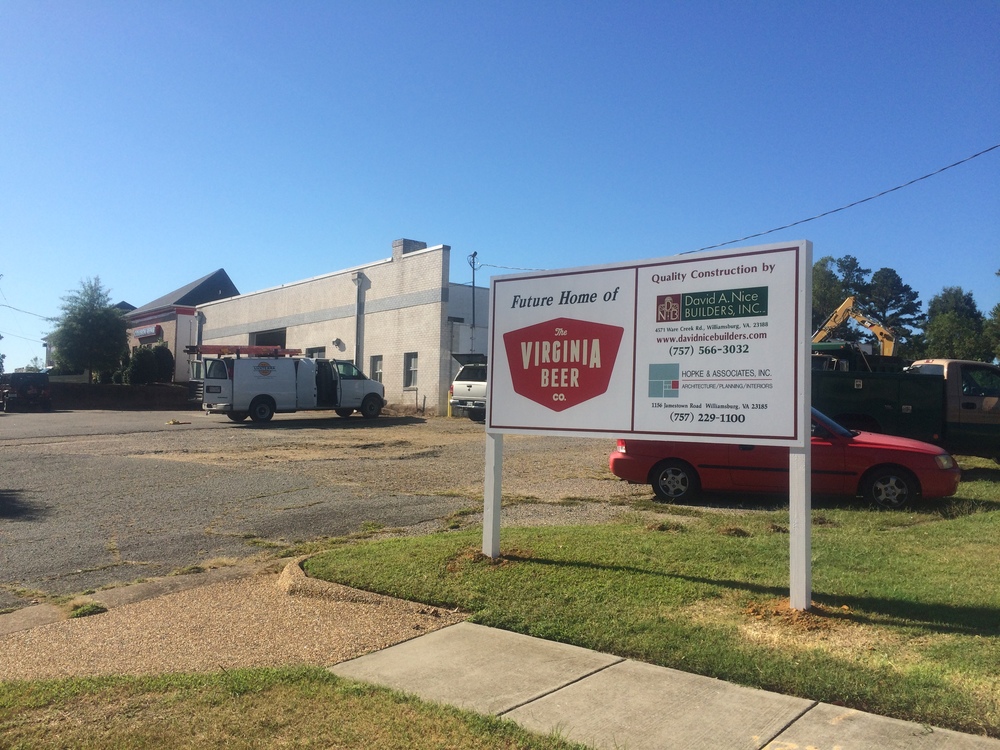 We have reviewed the formal scope of our buildout in detail with our project manager, and have scheduled in-person updates with him and his team to be held at the building every other week. In addition there is a project foreman who is on site every day. Chris, Jonathan and I meet with the foreman every morning to discuss the previous day’s results and the current day’s goals. In addition we use our time on the premises to meet with sub-contractors (e.g., electrical, plumbing) to discuss measurements, equipment, and to review architectural plans. The VBC team is committed to ensuring there is at least one point person on site every day with the contractors to ensure questions are answered in real time so no needless delays are caused between the brewing side and the construction side.

We are now working with two master schedules. The first, focused on our site work, runs from September through mid-November. Three weeks in we have already seen all the pavement around the property stripped. As of today the crews were beginning to level the future parking & beer garden surfaces. All exterior retaining walls and rip rap have been removed and the teams are beginning to place foundations for the future fencing and walls going up around the site’s perimeter. In October we will turn our attention to outside plumbing extensions including a separator installation (to collect solids from the brewing process before they enter the sewage system) and storm drainage tie-ins. We will also look ahead to exterior lighting plans.

The additional schedule is focused on the site’s overall timeline, with a focus on our interior demo and buildout. This plan runs from September through mid-December. Similar to our site work, the interior of 401 Second Street has already been transformed from what was once held in the facility. The interior has been completely gutted – all masonry walls within our main facility have been demolished, as have the walls in what will be the office/lab/restroom/utility space in the one-story side of the building. Old amenities and piping have been removed from the rafters on the ceiling, and most of the old equipment and decorations previously held in the building have been cleared out by the building’s owner. Flooring has been cut for interior plumbing improvements, including our future taproom fixtures, brewing equipment, coolers, and renovated restrooms. In October the team will turn its focus to staging the new interior walls that need to be erected, filling in trenches, treating the floors, and electrical work that will pick up ahead of large equipment arrivals.

We are thrilled to be moving ahead with our plans after an unexpectedly lengthy permitting process. On the heels of our Red Rye IPA collaboration with Alewerks Brewing Co., we are riding a high wave of momentum! We have some great videos of the work going on at our Facebook page, which we invite you to view here. Our Facebook page and Instagram account also feature many additional photos and videos of the progress. We will feature regular updates throughout the buildout, including a time lapse from start to finish as well as before & after photos.

We will continue to post periodic updates on our additional buildout plans and progress. And real time updates will be available across all of our social media platforms. We are working to finalize our opening timeline and will be sure to share that as soon as the time frame is settled. Thank you to everyone for your continued support and enthusiasm for our project!