Now that we have received our site approval, which allows us to OFFICIALLY begin work turning 401 Second Street into The Virginia Beer Company, I thought it would be prudent to take a look back at our site approval process with a focus on how it all began at our initial pre-approval meeting with York County. This was the meeting that formally started the process of establishing the county (and city and state!) review of our proposed construction/operation plans.

Our work with York County began as far back as late 2014, discussing possible venues for the brewery and leading to our selection of 401. In addition, we spent time with the county’s Office of Economic Development to review tax rates, financial projections, and avenues for economic support to help us start our business. These early conversations also led to our presentation in front of the county’s Economic Development Authority; this resulted in grant money being allocated to VBC for projects determined necessary to modernize the space housing our future brewery.

As Chris has already noted, in February 2014 we met with county and state officials for our site’s pre-approval meeting. The purpose of this meeting was to get liaisons from all departments that would need to approve our site plans in one room so that a general overview of the plans could take place in one team setting. The meeting involved numerous individuals representing the following groups:

The meeting itself can best be described as being similar to a grad school thesis defense. County staff took turns looking through various aspects of our site plan that were significant to their respective roles and departments. At each turn, the representative reviewing the plans would ask questions of our site engineer, our architect, and our team. Each answer would in turn lead to possible requests for additional details or amendments to the plans. The entire review only took an hour or so, and we left the meeting with a list of topics to review with our engineer and architect. Luckily for us we had spent significant time with both ahead of this meeting, so the items under further consideration were nothing groundbreaking or business altering – items for followup included topics such as drainage, green space, dumpster placement during construction, and “flooring” plans for the beer garden. The meeting also gave us a chance to ensure our site engineer had all of the notes necessary to submit a formal site plan to the county for review.

The key point in taking the time to schedule and attend the pre-approval meeting was to have everyone in one place at one time. Having the chance to meet these representatives face to face, explain the purpose of the business, and receive feedback in real time meant we were able to focus our planning time and energy on topics we knew were likely to draw more questions during the formal site review process. Throughout the meeting, each reviewer also provided us with future items to consider as our business grows, including areas that may require future approvals. Topics included building permits, signage, silo additions, and work with food trucks. Best practices were also provided during the meeting, such as how to interact with neighbors and implications for various hours of operation. 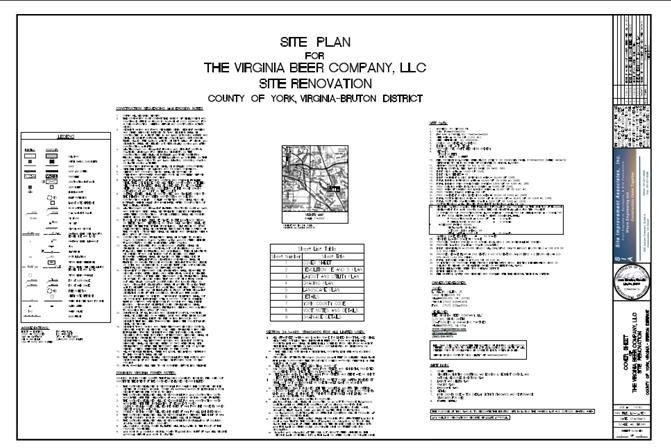 Upon making the requested updates received at the meeting, in April our site engineer submitted hard and digital copies of the site plan to each department requesting a review. These groups included the Virginia Department of Transportation (a state agency) and the City Engineer and Public Works & Utilities department of the City of Williamsburg. To complicate matters for 401 Second Street, the roads leading to/from our building are maintained by VDOT, hence their inclusion. In addition, even though we are in York County we are the last building on Second Street connected to the City of Williamsburg’s main water source! This means that the utilities review, especially as it involves sanitary & sewer details, needed review from both the City and the County. Once all offices had reviewed the plans, a Site Plan and Landscape Plan Checklist was returned to us by the York County Division of Development and Compliance. This response included copies of the official comments from each office, detailing what offices had signed off on the plan and what offices had requested additional details or changes.

The process of opening a brewery can be a long one. The combination of manufacturing, heavy utilities usage, production of alcohol, and managing production & retail operations makes the planning phase a very detail-oriented process. In our case, even with much due diligence on our part and a talented team of engineers, contractors and architects, we still embarked on months of Q&A with a number of oversight departments in order to ensure that all of their questions were answered. The longest portion of time spent in the early process is waiting until all departments return their comments to ensure changes can be made addressing all subjects at the same time; coordinating that timing across so many offices is no easy task!

Once the site plan is resubmitted with revisions, including hard and digital copies each time, it is once again reviewed and approved or questioned by each department. Coordinating these details across so many offices (including York County, VDOT and the City of Williamsburg) over multiple submissions takes time and patience – especially when the business model is fairly new to the area. BUT, the end result is a vetted site plan that will allow a general contractor to better price the project, and one that will have the backing of the local administrators (many of whom you will be working with throughout the life of your business). And the pre-approval meeting is the start of that long and continuous vetting period that will go on as your business begins and grows its operations.

After a lot of hard work and thorough conversations with our support team and public officials, we now have our site approval! This gave us the green light to sign our construction contract with our general contractor, David A. Nice Builders. And that means that we are (pardon our continued excitement) OFFICIALLY ready to break ground at 401. One more milestone reached for The Virginia Beer Company! 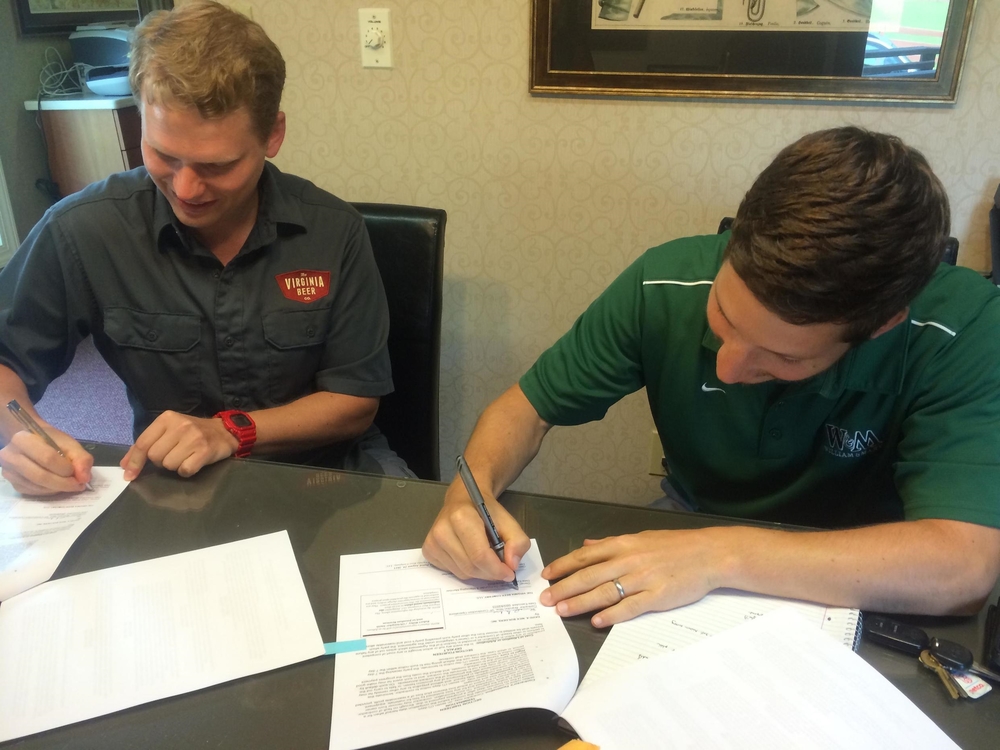